Arthropods have some very specific characteristics. They are all cephalized, have open circulatory systems, have an exoskeleton made of chitin, jointed appendages and they molt. They are also found all over the world. Arthropods can live in all types of environments including hot and cold weather, dry and moist climates and even high in the mountains, although most are found in tropical areas such as rain forests. There are four main classes of Arthropods. These are Crustacea, Myriapoda, Arachnida, and Insecta. (Alana)

“Spiders are arthropods found in the arachnida class and are the largest order found in this class. These arachnids are found all over the world, the only continent which they are found is Antarctica because of the extreme conditions. They are air breathing and have eight legs along with two body sections (the cephalothorax and the abdomen) which are joined together with a small pedicel…”[Read More]

“The daddy-long leg is classified as an arachnid but are under its own order, Opiliones.  It has been discovered that they are not spiders. In fact, they are more closely related to scorpions than to spiders…”[Read More]

“Butterflies are Arthropods which means that they are cephalized, have an open circulatory system, have an exoskeleton made of chitin, jointed appendages and they molt. They are also found all over the world…”[Read More]

The Behavioral Patterns of the Praying Mantis

“The praying mantis is an insect like no other, growing up to 6 inches in length and being the only insect that has the ability to turn its head 180 degrees. It has two large compound eyes on either side of its head, and three smaller eyes located in the center of its head…”[Read More]

“Blood” is confined to vessels during only a portion of its circuit through the body. The remainder of its journey takes place within the body cavity (called the hemocoel). For this reason, insect “blood” is called hemolymph

Exchange oxygen and carbon dioxide between their tissues and the air by a system of air-filled tubes called tracheae. Tracheae open to the outside through small holes called spiracles. Spiracles open into large tracheal tubes. These, in turn, lead to ever-finer branches. The branches penetrate to every part of the body.

Horseshoe Crab:
Horseshoe crab’s vision is an adaptation and they have 7 eyes on top of their bodies. The final light sensing organ is located along the length of their tail, scientists think that they help the arthropods to synchronize their activity pattern with the lunar cycle. Their carapace used for protection of their soft bodies. Horseshoe crab legs help bring food into their mouth. They also have a primitive immune response that detects endotoxins. 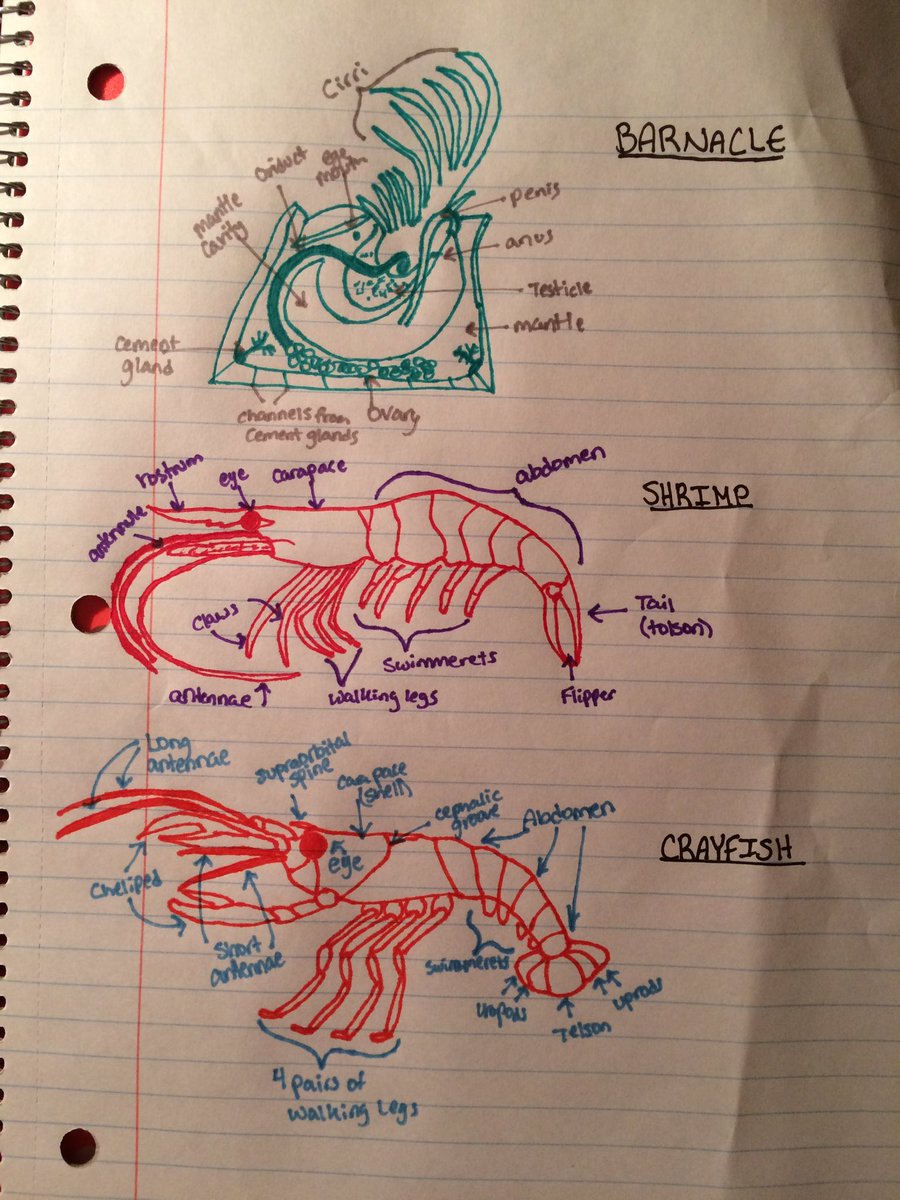 As you can see in the above drawings,crayfish and shrimp have many similar appendages. Some of these include their antennae, abdomen, carpace (shell), antennules, swimmerets, uropods, telson and walking legs. Crabs also share some of these features like the walking legs, antenna, carapace and chelipeds. Crayfish and shrimp are much more similar to each other in regards to body type and anatomy than to a crab. 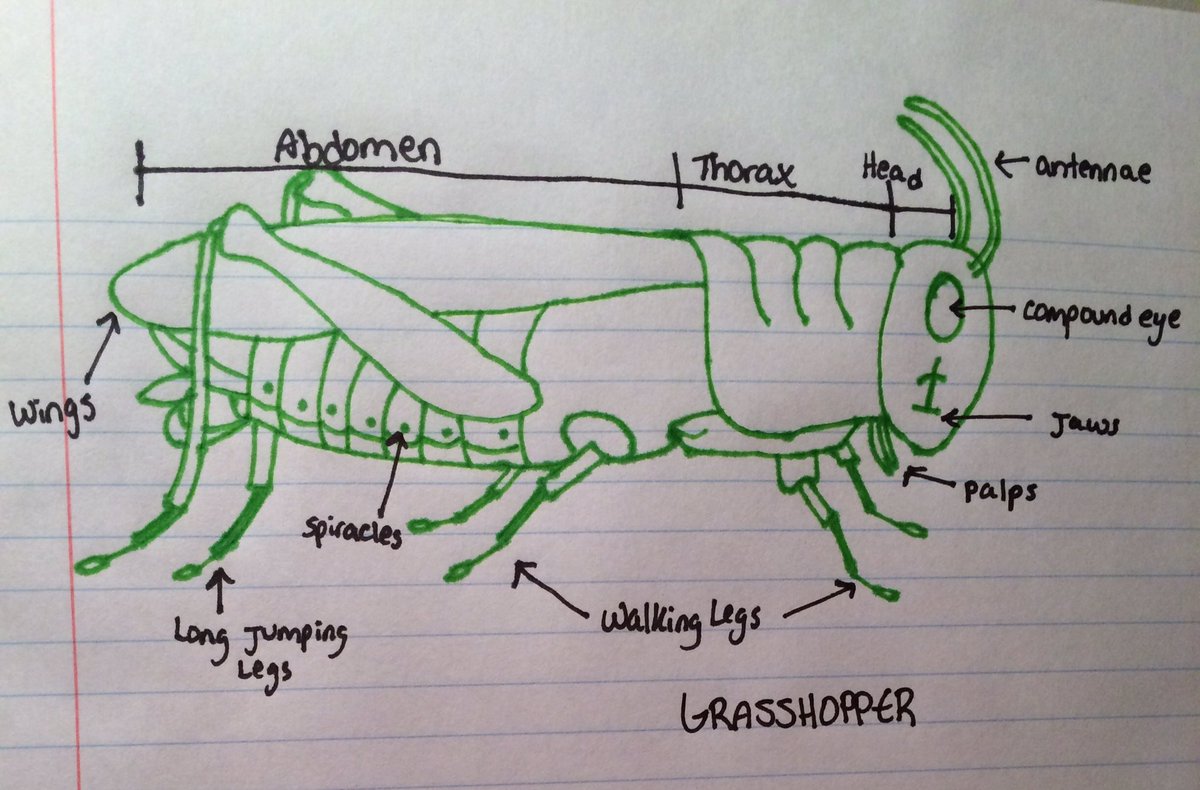 The main difference between grasshoppers and crickets is their antennae and their diet. Crickets tend to have long antennae while grasshoppers have short ones. Also grasshoppers mostly only eat grass but crickets are likely to eat animal matter.

“Also known as Chagas Disease, American Trypanosomiasis  is a vector borne disease. The triatomine bug commonly known as the kissing bug, cone-nose bug and chinches is the arthropod insect vector that if infected with the Trypanosoma cruzi can spread it to humans, dogs and other mammals…”[Read More]

Horshoe Crabs in the Medical Industry

“Horseshoe Crabs, otherwise known as “living fossils“ are some of the oldest animals in the world. Their ancestors date back to 445 million years ago, which is 200 million years BEFORE dinosaurs. Because of their name, most people think they are crustaceans but they are actually more closely related to arachnids…”[Read More]

“Ophiocordyceps unilateralis is an insect pathogenetic fungus which was discovered in tropical rainforests in the late 1850’s. This fungus is known to alter the action of the insets (mostly found in ants) by affecting its genome and attacking the brains of its victims. This is what created the term “zombie ants” because of the unusual interactions the infected insect perform (not having control over their own body)…”[Read More]

“Yellow fever is a major health issue that impacts Africa and South America, but is significantly more prevelant in Africa. In Africa 34 countries are endemic where as only 13 countries in South america are endemic. Approximately  200,000 people are affected by yellow fever  and it has been estimated that it has caused 30,000 deaths…”[Read More]

Why are Humans Afraid of Spiders?

“Spiders are in the phylum Arthropoda but they are not insects like a majority of arthropods as they are an arachnid.  Spiders are eight-legged animals that have two main body parts (cephalothorax and abdomen) and also have silk spinning organs, simple eyes, fangs, and almost all spiders reproduce sexually.  In comparison, insects have three main body parts, six legs, compound eyes and chewing jaws instead of fangs…”[Read More]

Myths and Truths about Spiders