Sponges are part of the phylum porifera. They are multicellular parazoan organisms and their bodies are full of pores and channels that allow water to circulate through them. They also have mesohyl sandwiched between two thin layers of cells. Sponges contain unspecialized cells that are able to transform into other types of cells and will often migrate between the main cell layers and the mesohyl layers. Sponges do not contain nervous, digestive or circulatory systems, instead they maintain a constant water flow through their bodies in order to obtain food and oxygen, and also to remove wastes. Although there are about 9,000 species of describes sponges, only a few of them are important for harvesting. These are the sponges that have a skeleton made of the spongin fiber. There are only 5 commercially harvested sponges in Florida, they are the  sheepswool sponge, yellow sponge,  glove sponge, finger sponge,and the grass sponge.

How are Sponges Harvested?

Sponges are typically harvested from the bottom of the ocean by divers. These divers will use either a specially designed hook or knife to do the harvesting. The divers will cut about 2/3 of the sponge off and keep it for harvesting, leaving the rest of the sponge to regrow. The divers will squeeze the gurry out of the harvested sponge and it will be taken back to the boat. On the boat the sponges are cleaned and left under a burlap sack in the sun. This method of harvesting sponges is much better than the original way that sponges were harvested. When people first started this process, they would use a hook and tear the sponges from the bottom of the ocean instead of cutting them. This only gave a 41% survival rate while the new method of cutting gives about a 71% survival rate for the sponges.

Below is a picture of how sponges were originally harvested with a hook.

Here is a video that shows the sponge harvesting process!

What are Harvested Sponges used for?

Harvested sponges are sold and used in a variety of different products. Some of the most common products include cosmetics, personal hygiene products, pet bathing and care products, painting, arts and crafts, equine and tack care, outdoor adventuring, and household cleaning and dish washing. Researchers are also looking into how sea sponges can help provide alternative treatments for various ailments. Many people prefer using sea sponge instead of synthetic sponges because they are hypoallergenic and toxin-free. They are also much more absorbent, softer, do not retain odors and will typically last longer. 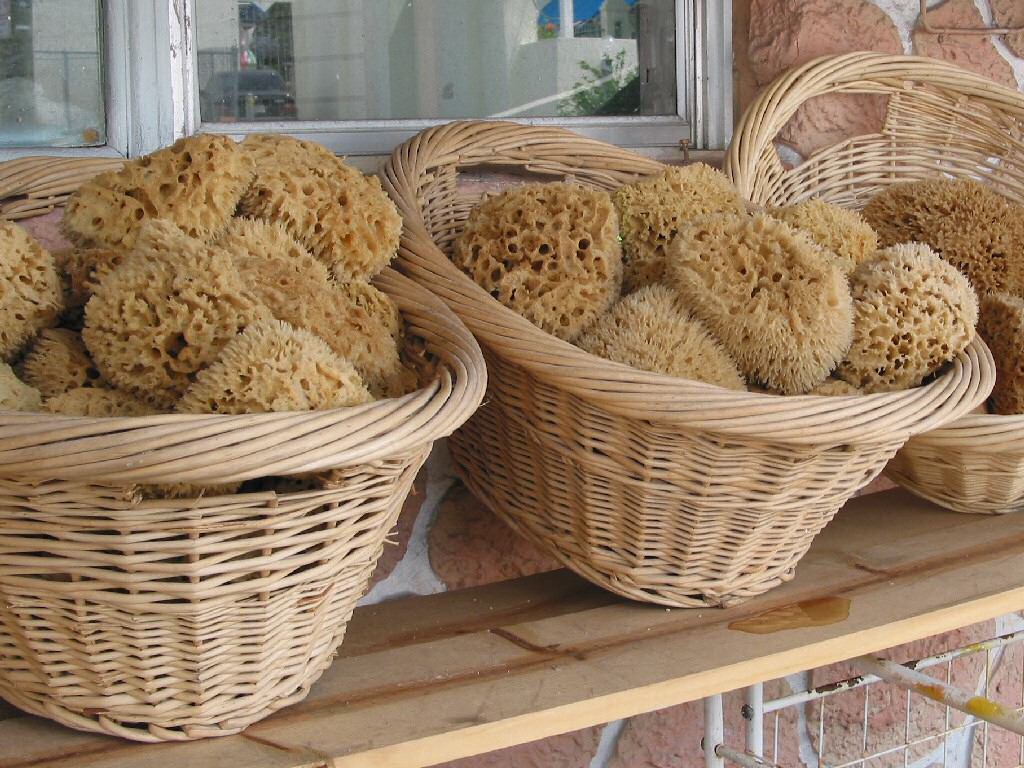 How does Harvesting Sponges affect the Environment?

When done correctly, harvesting sea sponges is surprisingly not as bad for the environment as most people would think. As long as the divers make sure that they leave enough sponge in the ocean, the sponge will be able to regenerate itself within a couple of years. There are some studies that state that the regular harvesting of sponges can actually be beneficial to the population by removing the older sponges and allowing them to grow back bigger and healthier. Also Some pieces of sponge that are broken off in the harvesting process will fall back down to the ocean floor and reattach to a hard object. These sponges can regrow into completely new sponges which increases their population density, and the overall sponge population.

Even though sponge harvesting can be good for the sponge population, if they are over harvested it would be bad for other species that rely on the sponges. Over harvesting of any product is usually not good for the environment and sponges are no exception.

One of the first drugs that successfully treated cancer was called cytosine arabinoside. This drug was made from two isolated chemicals from a Caribbean sponge, Cryptotheca cripta. These two chemicals were named spongothymidine and spongouridine. These two chemicals were used as models for the development of many anti-viral and anti-cancer drugs, including the HIV drug AZT and a breakthrough in AIDS treatment. There was also an anti-leukemia drug made and in 1969 it became the first marine-drug approved for cancer treatment.