The purpose of this lab was to view and learn to identify  specimens. We were also supposed to record the Group or Clade for each slide or culture. For almost all of the specimens I took a photograph and drew the specimen. The last part of the assignment was to label as many structures as we could and define and describe them.

Foraminifera- These are members of a phylum of amoeboid protists. they are characterized by streaming granular ectoplasm to catch food and and usually have an external shell of diverse forms and materials. Fossil Foraminifera appeared in the early Cambrian period.

Radiolaria-The Radiolaria are protozoa that produce complex mineral skeletons. These skeletons usually have a central capsule that divides the cell into the inner and outer portions of endoplasm and ectoplasm. They are usually made of silica and are found as zooplankton throughout the ocean. Their skeletal remains make up a large part of the cover of the ocean floor as siliceous ooze. They represent an important fossil found from the Cambrian onwards.

Mixed Ciliates- The ciliates are a group of protozoans that are characterized by the presence of hair-like organelles called cilia. Cilia have the same structure as eukaryotic flagella, but are shorter and much higher amounts on each organism.  Cilia are used for swimming, crawling, attachment, and feeding. Ciliates are common almost everywhere there is water and about 3,500 species have been described. Scientists believe that the number could potentially go up to 30,000 species.

Mixed Flagellates- A flagellate is any of a group of protozoans that at some point in their life cycle possess one to many flagella. These flagella are  hairlike structures capable of whiplike lashing movements used for locomotion and sensation. Most flagellates have a thin, firm pellicle or a coating of a jellylike substance. Flaggelates can reproduction either asexually or sexually. Flagellates are also divided taxonomically into two classes.

Euglena- The Euglena is a genus of single-celled flagellate eukaryotes. It is a widely studied member of the class Euglenoidea. There are species of Euglena are found both in fresh and salt waters. They are usually abundant in quiet inland waters where they are capable of blooming in large enough numbers to color the surface of ponds. Most species of Euglena have photosynthesizing chloroplasts which allows them to feed by autotrophy like plants but they are also capable of feeding heterotrophically, like animals.

Paramecium- Paramecium is a genus of unicellular ciliates. Paramecia are commonly found in freshwater, brackish, and marine environments. Paramecium are very useful as a model organism since many types of it are easy to reproduce.

Spirostomum- Spirostomum are a genus of free-living ciliate protists, belonging to the class Heterotrichea. Species of Spirostomum can be found in both salt and fresh water. They are all are elongated, flexible and highly contractile.

Stentor and Rotifers- Stentors are a genus of filter-feeding, heterotrophic ciliates. They are also representative of the heterotrichs. Rotifers are a phylum of microscopic and near-microscopic pseudocoelomate animals.

Volvox- Volvox are part of a polyphyletic genus of chlorophyte green algae in the family Volvocaceae. They forms spherical colonies of up to 50,000 cells and live in a variety of freshwater habitats. Volvox are thought to have diverged from unicellular ancestors approximately 200 million years ago.

Amoeba-An amoeba is a type of organism which has the ability to alter its shape by extending and retracting its pseudopods. Amoebas do not form a single taxonomic group, they are found in every major lineage of eukaryotic organisms.

Paramecium Caudatum-trichocysts-  Trichocysts are a structure in the cortex of certain ciliate and flagellate protozoans. They consist of a cavity and long, thin threads that can be ejected in response to certain stimuli. Trichocysts may be widely distributed over an organism or restricted to certain areas.

Paramecium Caudatum-fission –  Paramecium is a genus of unicellular ciliates. They are very useful as a model organism since many types of it are easy to reproduce. They are able to reproduce by binary fission.

Amoeba Proteus-  They use  pseudopodia to move and phagocytose smaller unicellular organisms. They live in freshwater environments and feeds on other protozoans, algae, rotifers, and even other smaller amoebae

Plasmodium- Plasmodium  is a genus of parasitic alveolates. Many of these parasites cause malaria in their hosts. The parasite always has two hosts in its life cycle: a Dipteran insect host and a vertebrate host.

Trypanosoma- Trypanosoma is a genus of kinetoplastids which is a monophyletic group of unicellular parasitic flagellate protozoa.

Trichomonas- Trichomonas is a protozoan parasite. 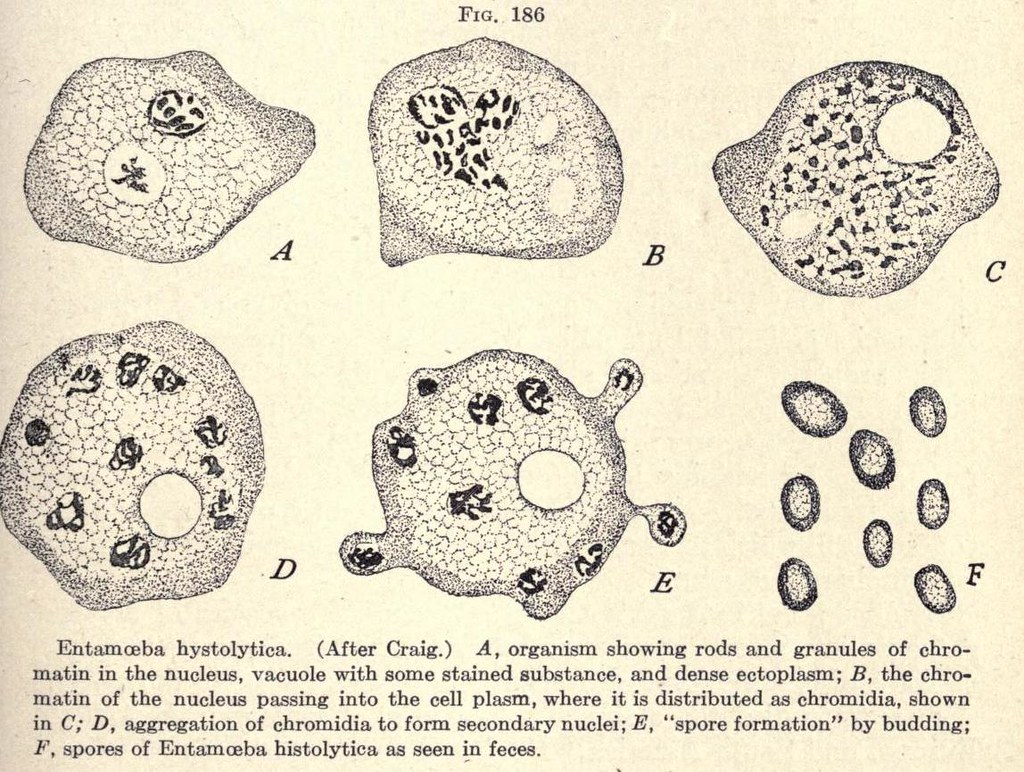 Giardia- Giardia is a genus of anaerobic flagellated protozoan parasites of the phylum Sarcomastigophora. They colonize and reproduce in the small intestines of several vertebrates, which causes the disease giardiasis.