There are a variety of different species of mystery snails. Some of these species such as the Chinese mystery snail, Japanese mystery snail and the banded mystery snail are invasive species. They form large, dense populations, which then take resources such as food and habitat away from the native species. They can also be carriers of parasitic worms that can be transferred to predators. Predators of the mystery snail include waterfowl, Betta fish, crayfish, and various types of fish depending on the habitat that they’re in. Their diet includes algae, and small decaying plants and animals. Mystery snails are not very social animals. They live in large groups but do not interact with each other often. They typically will only interact with each other to breed.

Pomacea diffusa are more commonly known as the spiked-top apple snail. Their shell size typically ranges from 0.5 inches to 1 inch. This is the only species of mystery snail that is not considered invasive. They are commonly found in freshwater aquariums but they are native to the amazon basin and Bolivia. They can also be found in parts of Florida. They are relatively easy to take care of in aquariums. What you have to watch out for the most is the pH of the water and making sure that they don’t get stuck in the filter or escape the tank. Their egg masses are pink and are laid above the waterline on plants. There can be anywhere between 200 and 600 eggs in a mass. These snails do not have gills so they occasionally need to surface to breathe air.

The Chinese mystery snail is native to East Asia and Northern China, although it has made its way over to North America where it is considered an invasive species. It is possible that some of these snails were released from an aquarium into the Niagara river. This species of mystery snail was also sold in San Francisco at Chinese food markets in the late 1800’s. As an adult, they have greenish-brown or reddish-brown shells. The shell grows allometrically. This means that the height of the shell increases faster than the width of the shell does. It is difficult to eradicate Chinese mystery snails because they have the ability to close themselves into their shell when water conditions are unfavorable. This means that if chemicals are used to try and get rid of them, they will probably do more damage to other species that don’t have this ability than the mystery snails themselves. The most popular method used to try to control the population is the biological method. This method introduces predators such as turtles and fish into the environment to feed on the snails in an attempt to decrease the population.

The banded mystery snail is native to Florida and the Gulf of Mexico. They mostly live in lakes, ponds and rivers that have mud bottoms. This is because they feed on the diatom clusters found in mud substrates. This allows them to be bioindicators of contamination by oil or fertilizers  because when they eat the contaminated materials, it can effect their growth and survival. Although their native habitat is in the south, some have recently been found in the north east. In upstate New York it is considered an invasive species. Although not on the same level as some invasive species such as zebra mussels, the banded mystery snail is making drastic changes to the lakes and rivers in New York.

The Japanese mystery snail is native to Japan, Taiwan and Korea, but similarly to the Banded mystery snail and the Chinese mystery snail, it has made it way into the Great Lakes Region where it is causing problems as an invasive species. They were also once sold in Asian food markets and can be carriers of parasites. 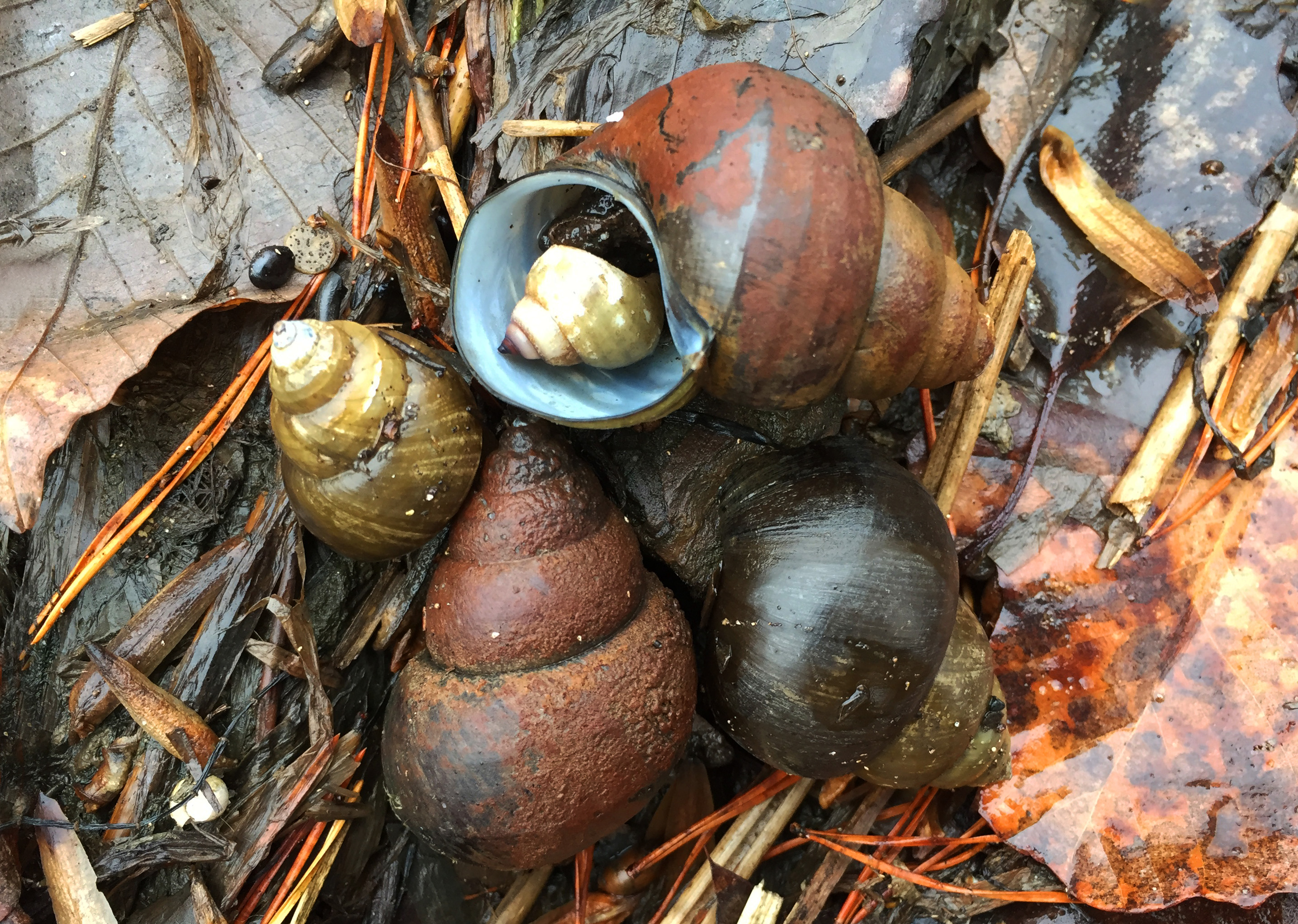 Other ways that snails can defend themselves is by retracting into their shells or hiding in crevices and other hard to reach places. The shell color being able to blend into the environment can also be a large advantage in being able to hide from predators.