Bioluminescence is the biochemical emission of light by living organisms. It mostly occurs in marine organisms but it can also be found in some fungi, microorganisms and some invertebrates. An animal can produce the light itself in some cases, but in others it is the result of a symbiotic relationship with an organism such as  Vibrio bacteria. In order for an animal to produce light, a chemical reaction needs to occur. In order for the reaction to occur, the organism needs to contain luciferin. This is a molecule that produces light when it comes in contact with oxygen.

Bioluminescence can have many uses such as counter illumination camouflage, mimicry, luring prey, signalling to others of the same species, attracting a mate, and protection. Some organisms such as the Comb jellyfish are often mistaken for having bioluminescence. Comb jellies have eight rows of fused cilia that run down their body. They use this cilia to move. These rows of cilia often create a rainbow effect that many people mistake as bioluminescence. It is actually light being scattered into different directions by the moving cilia.

Some Organisms That Use Bioluminescence

The Firefly squid lives in the deep sea and is only about 3 inches long when fully grown. Although they are very small in size, they put on an impressive light show every year along the coast of Japan when they are ready to spawn. They are able to create bioluminescence because of photophores found all along their body. These lights can be flashed in many different patterns and are thought to be used for multiple functions such as mating and disguising the squids shape to confuse predators. When their bioluminescence is used for mating, that could be an example of sensory exploitation. If a female prefers a certain light sequence, then they are more likely to mate with males that perform it.

The image below shows what the photophores look like on the squid and where a majority of them are located. 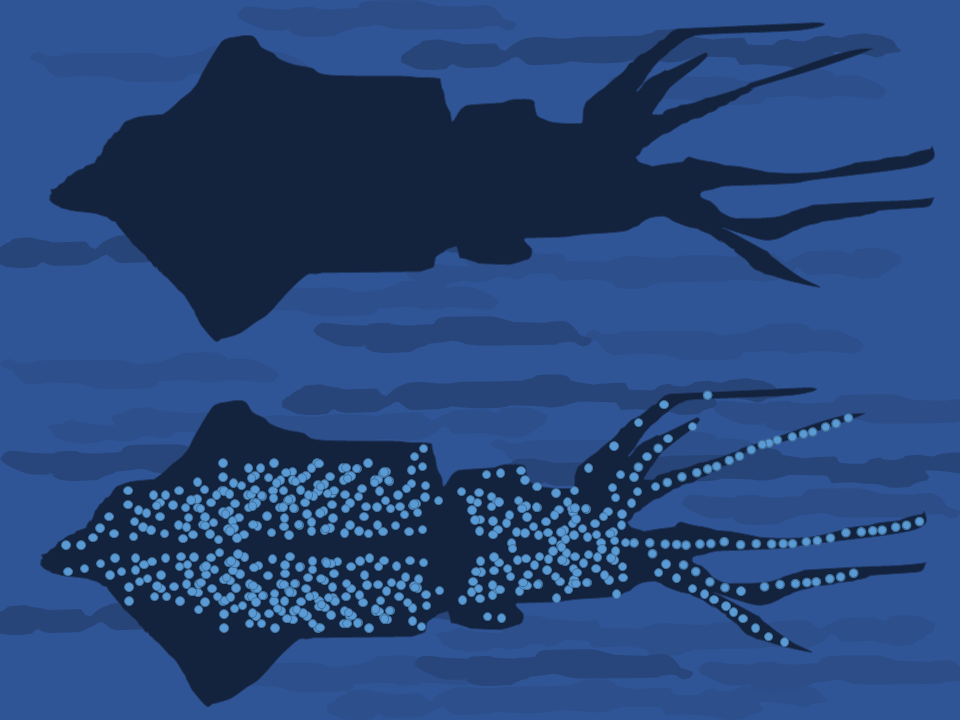 The Video below shows what the firefly squid look like when they gather on the coast of Japan.

Fireflies, also sometimes called lightning bugs, use the bioluminescent enzyme luciferin to create light. Unlike most things, when they create light, they create very little heat. It is known as a “cold light”, with no infrared or ultraviolet frequencies. Fireflies are thought to light up for a variety of different reasons. Larvae use their light as warning signals to predators because they produce defensive steroids in their bodies that make them a less than ideal meal. Studies have shown that adult female fireflies choose a mate based on the males flash rates and intensities.

Angler fish are one of the most well known deep sea fish thanks to the movie Finding Nemo. They are also a great example of an organism that relies on a mutualistic relationship for their bioluminescence. The angler fish use the bioluminescence of a tiny bacteria called photobacterium to help catch their prey. The bacterium live in the Angler fish’s esca, and are used to lure prey towards the Angler fish. In return for helping the Angler fish catch prey, the bacterium get protection and nutrients as the fish swims along.

In the Turks and Caicos Islands, after sunset a few days after there was a full moont, small marine glow worms will come to the surface and put on a show. It is short but beautiful. The green glow is caused by a fluorescent photoprotein that the female worm releases along with her eggs.

4 thoughts on “The Importance of Bioluminescence”