The red tide occurs when the algae from algal blooms becomes so numerous that it discolors the water. It is also sometime referred to as a Harmful Algal Bloom or “HAB”. This is where the name “red tide”comes from. Some key factors involved in red tides forming are warm ocean surface temperatures, low salinity, high nutrient content, calm seas, and rain followed by sunny days during the summer months. Some effects of the red tide are that it could deplete the oxygen in the water and/or release toxins into the water. The toxins in the water could have negative effects on the health of humans and animals exposed to them. There are three types of algae that can release these harmful toxins, they are Alexandrium fundyense, Alexandrium catenella and Karenia brevis.

This is a great video that helps explain more about red tides and the effects that they can have.

Negative Effects of the Red Tide

The red tide can have negative effects on a wide variety of marine animals. Fish are very commonly affected by the toxins that the algae produces. This is very bad because once some fish are poisoned by the toxins, they can then work their way up the food chain to larger marine animals or even birds that eat the fish. Even whales can be poisoned by the harmful toxins produced by these algal blooms. 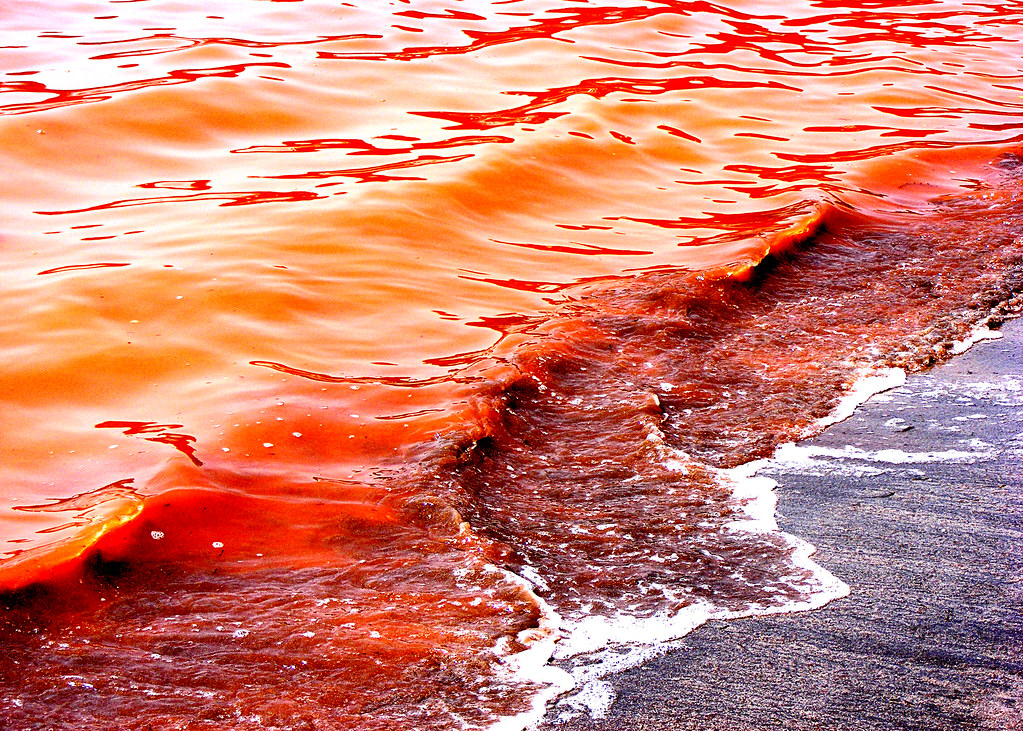 Harmful algal blooms can also be a threat to human health. This most commonly occurs when humans eat shellfish that have been exposed to the toxins. Paralytic Shellfish Poisoning is typically found along the Pacific and Atlantic coasts of the United States and Canada. It can cause paralysis and in extreme cases death. Some of the toxins that cause Paralytic Shellfish Poisoning can be 1,000 times more potent than cyanide.

Diarrhetic Shellfish Poisoning is another example of a harmful effect from eating contaminated shellfish. It is caused by Okadaic acid, which is produced by several species of dinoflagellates, and is usually non deadly to humans. Small amounts of the Okadaic acid usually do not have any harmful effects and only become an issue when large amounts are consumed.

Amnesic Shellfish Poisoning is the third common poisoning that humans will get from eating contaminated shellfish. It can be life threatening and cause both gastrointestinal and neurological disorders.The disorders are caused by the domoic acid. After an incident in Canada in 1987 where 4 people died from Amnesic Shellfish Poisoning, the levels of domoic acid in shellfish are now being monitored.

Positive Effects of the Red Tide

Although some Algal Blooms can be negative towards the environment, this is not always the case. It is actually only a small percentage of Algal Blooms that are harmful. Most are actually beneficial to the environment. This is because they do not produce the harmful toxins, and instead they provide a major source of food and energy to the marine world.

Algal Blooms can have serious effects on corals. Red algae, brown algae, and green algae are a few examples of macroalgae that can have a very negative effect on corals. They do this by outcompeting, overgrowing and eventually replacing sea-grasses and coral reef habitats. According to some research that is being done, harmful tropical algal blooms are increasing in frequency and intensity. This can have a significant impact on coral reefs.

What is Being Done

Scientists have been able to help control the spread of the effects of harmful algal blooms by developing new technology to help track them better. Tracking these harmful algal blooms could help prevent people from eating contaminated shellfish and knowing which areas will be most effected by them. Some examples of the technology that can help with monitoring them is better and more advanced satellite imagery. Also the development of an antidote to the toxins produced is another way to reduce the harmful effects.

8 thoughts on “The Red Tide”