Human noise in the ocean is becoming a major concern. From sonar on our submarines to cargo ship traffic and even oil drilling rigs, we are filling our oceans up with lots of unnatural noise. This noise is linked to altering many species calling, foraging, and migration patterns . In extreme situations, scientists also believe it is a reason there have been so many beached whales.

Here is a video that shows what some different noises in the oceans sound like, and how loud they really are.

Effects of sound on whales

It seems that whales and dolphins are the marine animals that are most affected by the noisy oceans. Although natural noise in the ocean from wind, waves or other marine animals is a common occurrence, they are not nearly as intense as noise from humans. This more intense and frequent noise can be causing stress to whales and contributing to them beaching themselves. One scientist has said that he has seen whales abandon a location because of noise. These locations sometimes contain a food source necessary for the whales survival.

Sound waves from military submarine sonar systems can get as loud as 235 decibels. They are able to travel hundreds of miles and can maintain the intensity of 140 decibels as far as 300 miles from the source.

Cargo Ships create what is known as ambient noise. This is particularly concerning for low-frequency great whales. Right whales are endangered and it has been proven that noise from cargo ships constantly crossing the ocean is causing them stress.

Here is a video on the process of deep water oil rigging. It would be hard to believe that these rigs don’t make a ton of noise. It is understandable that hearing noise from these rigs constantly could stress a whale out or confuse it considering they rely heavily on acoustics for survival.

On February 10th, 2017, New Zealand had over 600 Pilot whales wash ashore. Volunteers were able to save about 80 of the whales, who went on to join a nearby pod. After they were saved, later that night the pod that they joined got stranded on Farewell Spit. Although the cause of these whales stranding and beaching themselves is unknown, one theory is underwater noise. The loud sound waves that humans create can panic the whales into surfacing too quickly or swimming into the shallows. 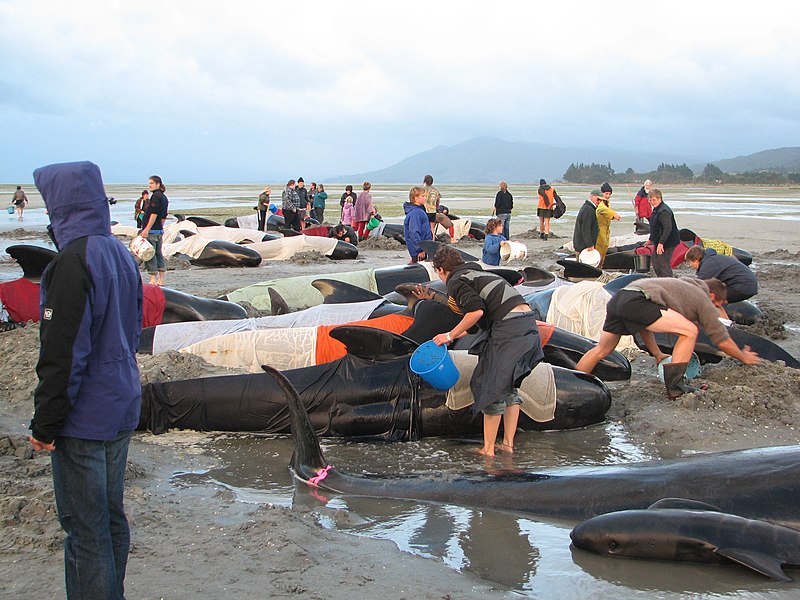 In May 2016, more than 20 whales beached themselves near San Felipe, Mexico. According to one statement, there were no signs of injuries noted on the whales, but they seemed disoriented.  Since the whales had no signs of injury, it is very reasonable to believe that sonar and loud ocean noise drove them out of deep water towards the beach.

Less than a year after 330 whales washed ashore on Patagonian Inlet, 70 whales were found on a beach in southern Chile. Although they are not the same species, this is a terrible trend that is happening. The whales were smaller this time and they had been dead for about 2 months before they were found.